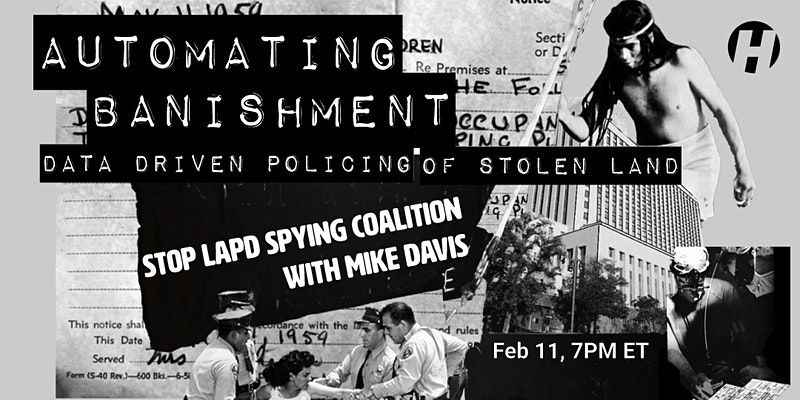 Join members of Stop LAPD Spying! and Mike Davis for a teach-in on how police and real estate work together to control stolen land.

Surveillance and data collection have long been advanced by colonizers working to control and conquer land. While more people are beginning to understand the role of data in policing, less attention is paid to data-driven policing’s relationships to land. The Stop LAPD Spying Coalition is a community group building power to abolish police surveillance in Los Angeles and beyond. Their new report Automating Banishment: The Surveillance and Policing of Looted Land examines the role of police data in real estate development and gentrification, with a focus on the process that has always bound policing and capitalism together: colonization.

Join us for a discussion with abolitionist organizers about the deadly violence and banishment that police data helps automate.

***Register through Eventbrite to receive a link to the video conference on the day of the event. This event will also be recorded and live captioning will be provided.***

Steve Diaz is with the Los Angeles Community Action Network where he has worked on campaigns to improve the overall community for long terms skid row residents.

Deshonay Dozier received her Ph.D. in Environmental Psychology at the City University of New York. Dozier’s research broadly focuses on abolition in the urban landscape. She currently holds positions as a University of California Chancellors Postdoctoral Fellow and an Assistant Professor of Human Geography at CSU Long Beach. Her book manuscript, Another City is Possible: Skid Row and the Contested Development of Los Angeles examines how unhoused and poor people across multiple intersectional identities have reshaped the penal organization of their lives through alternatives visions for the city since the 1930s. Dozier has published in the International Journal of Urban and Regional Research, Antipode: A Radical Journal of Geography, and Housing Studies. Dr. Dozier’s work has been supported by the American Council of Learned Societies.

Mike Davis, professor emeritus of creative writing at UC Riverside, joined the San Diego chapter of the Congress of Racial Equality in 1962 at age 16 and the struggle for racial and social equality has remained the lodestar of his life. His City of Quartz: Excavating the Future in Los Angeles challenged reigning celebrations of the city from the perspectives of its lost radical past and insurrectionary future. His wide-ranging work has married science, archival research, personal experience, and creative writing with razor-sharp critiques of empires and ruling classes.

This event is sponsored by The Stop LAPD Spying Coalition and Haymarket Books. While all of our events are freely available, we ask that those who are able make a solidarity donation in support of our important publishing and programming work.