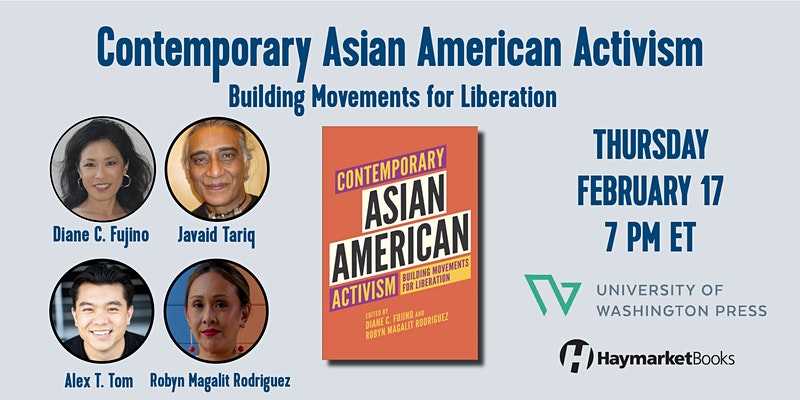 Join Haymarket and the University of Washington Press for a critical discussion on Asian American activism and movement building today.

Bringing together grassroots organizers and scholar-activists, Contemporary Asian American Activism presents lived experiences of the fight for transformative justice and offers lessons to ensure the longevity and sustainability of organizing. In the face of imperialism, white supremacy, racial capitalism, heteropatriarchy, ableism, and more, the contributors celebrate victories and assess failures, reflect on the trials of activist life, critically examine long-term movement building, and inspire continued mobilization for coming generations.

***Register through Eventbrite to receive a link to the video conference on the day of the event. This event will also be recorded and live captioning will be provided.***

Javaid Tariq is a cofounder and senior staff member of New York Taxi Workers Alliance and treasurer of the National Taxi Workers’ Alliance. He was born in Pakpattan, in Punjab, Pakistan. As a college student, he was active in the student movement against the military dictatorship. He migrated to Germany and later to the United States in 1990. Over the years he has organized numerous successful strikes, campaigns, and actions to promote economic and social justice for taxi drivers, a workforce that is 94 percent immigrant and primarily people of color.

Alex T. Tom is the Executive Director of the Center For Empowered Politics, a new project that trains and develops new leaders of color and grows movement building infrastructure at the intersection of racial justice, organizing and power building. He is the former Executive Director of the Chinese Progressive Association in San Francisco and co-founder of Seeding Change. In 2019, Alex received the Open Society Foundation Racial Justice Fellowship to develop a toolkit to counter the rise of the new Chinese American Right Wing in the US.

This event is co-sponsored by Haymarket Books and the University of Washington Press. While all of our events are freely available, we ask that those who are able make a solidarity donation in support of our important publishing and programming work.